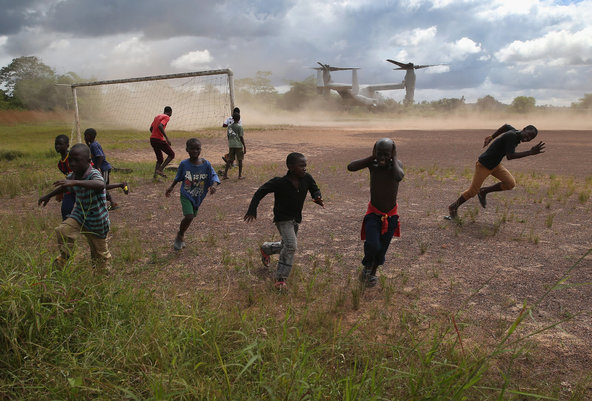 What do you think?

This week’s image comes from the Oct. 15, 2014 “Pictures of the Day” post on the Lens blog. The caption reads:

Boys ran as a United States Marine MV-22 Osprey tiltrotor departed the site of an Ebola treatment center under construction in Tubmanburg, Liberia.

The Times reported on Oct. 11 that:

The American military has had trainers in Liberia for years to help reinvent the country’s army. Now, President Obama’s decision to send American troops to build Ebola treatment units has added another layer to these already complex ties.

On Thursday afternoon, four Marine V-22 Ospreys landed at Liberia’s international airport in a thunder of noise. General Williams, the American commander here, was making plans to buzz Monrovia with the $70 million aircraft, counting on the visual and audio impact to tell Liberians that they are not alone in the Ebola fight.

This site uses Akismet to reduce spam. Learn how your comment data is processed.